“Briefest character description ever, from a wiki squib on this public domain   comics character from 1941:

Sharon Kane is the sworn enemy of all criminals. Her specially   designed bracelets eject spider webbing. Her boyfriend is a detective named Mike   O’Bell.

And, a relative rarity for R/R these days, an   image: On the face of it, this looks easier than the last few.

But, go on… make   something REALLY INTERESTING out of that… see how easy it is…! 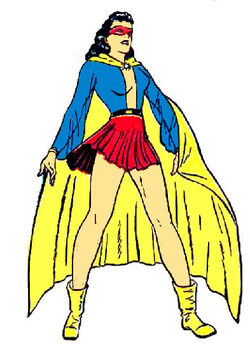 The following piece is to show the evolution from B&W to digital colours. The Black and White art was made on a 8 1/2 X 11 card, with only a 0.005 micron.

The colors on photoshop (step 2) was used just to give mood and shades: Blues and  Greys tints give a sad, dark and dirty mood. The final image (step 3), is heightened with the front characters who have been given warmer colours. And then, the light effects.

Ok, this one is really insane: From Contact Comics in 1944: Warren Ellis says: “Colonel Moore Williams knows the enemy is easily terrified by the   strange and unknown, so he becomes the superhero known as the Flamingo! He has   no powers and is only armed with his intellect, his physical strength, his   service revolver, and a specially built plane. He uses his new identity to   accomplish things the military cannot.”

The story and story board were originally done in under 3 hours, for the five pages. It took me much longer to properly onk, colour and letter the whole thing. But there you go.

And a few weeks later, a new thread:

A sequel to the Flamingo: Warren Ellis says: “Okay, this one has the potential for some crazy. Also, if anyone’s in the mood   to draw insane vehicles, now’s your shot…

As Skywolf, Larry Wolfe wore a white wolf pelt into battle and   headed a three-man flier team. Members of the team include Cocky Roche, who was   a cockney, and the Judge, an old Englishman turned down by the R.A.F. because of   his age. The last member was “The Turtle,” A Polish mute whose tongue was cut   out by Germans and who communicated by tapping on his own head in Morse Code.   The group flew special planes that split in half to become separate vehicles. In   fact, Skywolf and his team were such an effective group of Nazi fighters that   Adolf Hitler himself was desperate to get rid of them to the point of actually   participating in a plan to capture them. Skywolf teamed up with Airboy and   battled the monstrous Heap during the course of his adventures.

Si Spurrier says:
It’s not all euphemistic smut-adventurers and bee-fancying spandexers on Whitechapel, oh no. You’ll recall I launched my stewardship here with a chance to reinvent the Egyptian War-Goddess Sekhmet – as a pissheaded psychopath, naturally – and verily It Was Good. So. Let’s try some more of that sort of thing. ”Jenny Greenteeth is a figure in English folklore. A river hag, she would pull children or the elderly into the water and drown them. She was often described as green-skinned, with long hair, and sharp teeth. She is likely to have been an invention to frighten children from dangerous waters similar to the Slavic Rusalka, the Kappa in Japanese mythology, or Australia’s Bunyip, but other folklorists have seen her as a memory of sacrificial practices.” So: an aquatic psycho-slag to frighten kiddies, drown geriatrics and delight RPG players the world over. But hark! This is Remake/Remodel! This isn’t just a chance for you to get your Creep On and draw an old faerie gribblie, oh-ho-no.
You will update.  You will recontextualise.  You will use your tasty brainbits as well as your scribbledy pens of power.
Bethunk as follows: how does a slime-titted water-devil fit into whatever passes for contemporary folklore? Is she the same old hag of yesteryear, now living a 21st century life? Is she keeping herself to herself, or using her unique skills (of, um, drowning children) to get by? Has she found a new niche, as a Modern Monster?
Maybe you fancy spandexizing the poor fiend and turning her into a heroine or villainess.  Maybe “Jenny Greenteeth” is a tabloid nickname for a murderer, or a filename for a sentient techbug, or an experimental superweapon, or whatthefuckever.
Be Thou Interesting.

Me:How about Jenny as a schoolbus driver?

A long time ago, Warren Ellis posted a remake/remodel thread on a Ghost Exterminator: The theme said: “The Ghost Exterminator was created   by Gelett Burgess and appeared in Cosmopolitan and possibly a few other   magazines from 1904 through 1906.
The Exterminator is Hoku   Tamanochi, a Japanese San Franciscan who uses an ancient Japanese   formula and his family’s traditional skills to exorcise the ghosts of   San Francisco. Hoku sprays the ghosts with an ancient Japanese powder   when he finds them; this turns them semi-solid, and he then uses a   bellows to capture them. He then seals them in bottles, thus permanently   trapping them.
Hoku is (unwillingly, at first) teamed up with   the nameless narrator, who is Hoku’s friend. The narrator analyzes the   powder and creates a special compound of his own that does the same   thing. He then begins stealing Hoku’s business (some friend, eh?) and   making an additional profit by selling the ghosts, which he can   reconstitute with the help of radium. The narrator eventually fumbles   things and Hoku is forced to save him. The Exterminator stories follow   this pattern: the narrator gets greedy and is initially successful in   using Hoku’s ideas and methods, but eventually something goes wrong and   Hoku is forced to ride in at the last minute and save the day.”

So it took me a while and a bit of research on Japanese History and culture, since I didn’t want to mix facts and dates. For this story, I wanted to use another aspect of webcomics, the scroll down reading.